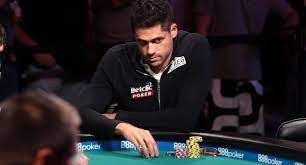 As a result of this latest win, the 2017 World Series of Poker main event third-place finisher has increased his lifetime live tournament earnings to more than $12.4 million.

Pollak entered the third and final day of this event in seventh place in seventh chip position. He found a key double up through chip leader Sergio Aido with seven players remaining, getting all-in with JSpade SuitJClub Suit and holding against his opponent’s 8Club Suit8Diamond Suit.

Koray Aldemir scored the next big knockout, winning a preflop race with his pocket jacks making a set against the AHeart SuitKClub Suit of Laurynas Levinskas. The Lithuanian earned $158,738 USD as the seventh-place finisher.

Sergio Aido was the next to go. The start-of-day leader had fallen to the bottom of the chip counts. Laszlo Bujtas shoved when it folded to him in the small blind with QSpade Suit9Club Suit. Aido picked up pocket aces and the big blind and made the quick call. Bujtas flopped two pair and held from there to send Aido to the rail in sixth place ($211,658 USD). The Spanish poker pro had quite the series in Monte Carlo, having won the €100,000 buy-in super high roller for $1,779,893 less than a week before making the final table in this event.

Pollak knocked two-time WSOP bracelet winner Michael Addamo out in fifth place ($270,245 USD) to continue his climb up the leaderboard.

Marton Czuczor eliminated a short-stacked Laszlo Bujtas (4th – $336,381 USD) to help keep pace with a surging Pollak and Aldemir. Czuczor eventually fell in third place after losing a huge confrontation against Aldemir, who had limped in on the button with QDiamond SuitJDiamond Suit. Czuczor checked from the big blind holding KClub Suit7Diamond Suit. The flop brought the QClub SuitJHeart Suit7Club Suit and Czuczor checked. Aldemir bet 80,000 and Czuczor called. The turn brought the KHeart Suit and Czuczor checked again. Aldemir bet 350,000. Czuczor made the call and the QSpade Suit completed the board. Czuczor checked for the third time. Aldemir moved all in. Czuczor went into the tank before making the call, only to see that Aldemir had made a full house on the river. With that Czuczor was knocked out in third place, earning $408,195 USD for his strong showing in this event.

The final hand saw the chips get all-in on a KHeart Suit6Heart Suit4Heart Suit flop with Pollak holding 9Heart Suit9Diamond Suit and Aldemir the KSpade Suit10Club Suit. The turn brought the 2Club Suit, leaving Pollak in need of a heart or a nine to close out the tournament. The 9Spade Suit on the river fit the bill, giving Pollak the winning set to secure the pot and the title.