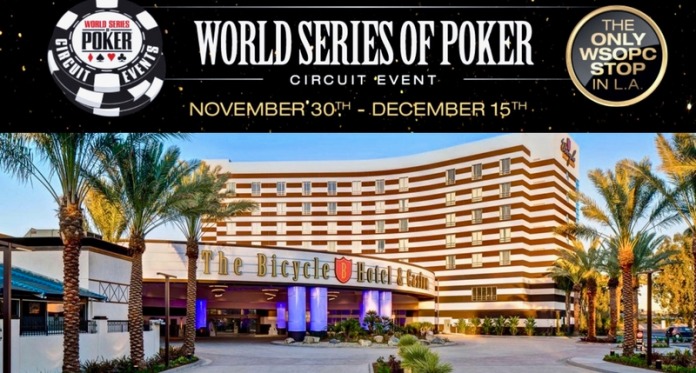 The WSOP Circuit is set to return to the legendary Bicycle Hotel & Casino in Los Angeles from November 30 through December 15. The series features thirteen gold ring events, with the centerpiece of the whole affair being the 2019 WSOP Circuit Bicycle Casino $1,700 buy-in no-limit hold’em main event, which kicks off with the first of two starting flights beginning on Sunday, Dec. 8 at noon local time.

Players will begin with 30,000 in chips with initial blinds of 100-100. Blind levels will be 40 minutes long throughout the starting days but will increase to 60 minutes in length on day 2. Players can re-enter the event once per starting day, with registration remaining open until the start of level 13 on each starting day.

Those that survive day 2 will return at noon on Wednesday, Dec.11 to play down to a champion. The final table will be streamed on Live At The Bike.

Click here to check out the official tournament structure sheet for the main event.

The December running of the WSOP Circuit main event at the Bicycle Hotel and Casino in 2018 drew a total of 547 entries to create a prize pool of $828,705. Steven Spunt emerged victorious in the end, capturing his second WSOPC ring and the top prize of $174,055.

In late 2015 the Bicycle Hotel and Casino unveiled a $50 million hotel expansion to the property. The 117,907-square-foot addition boasts 99 rooms, including 29 suites, as well as a multitude of amenities including the Bike Brewery, full spa and elevated outdoor pool deck with private cabanas. The poker room is an expansive 100,000 square feet, with 185 tables available.