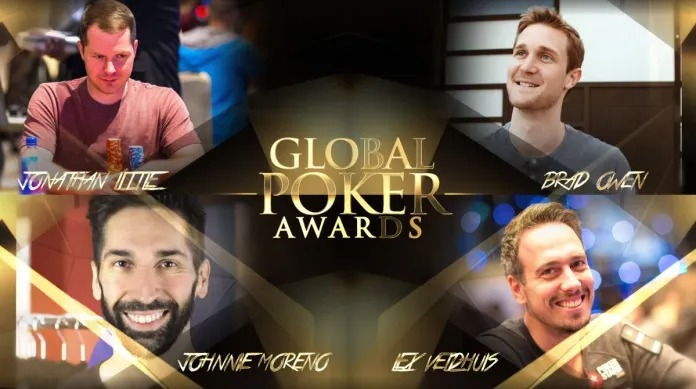 It wasn’t for Vlogger of the Year, but Brad Owen was a winner at the Global Poker Awards Friday evening. The popular vlogger shipped a gold trophy in the People’s Choice category and then proceeded to let his haters know, perhaps to their surprise, that he isn’t a virgin.

A sarcastic Owen closed out the evening with a hilarious speech. He took a shot at the voters for failing to nominate him for Vlogger of the Year despite having 100,000 YouTube subscribers. And he made sure to let everyone know details of his sex life.

“When you’re on YouTube, you subject yourself to a lot of criticism, a lot of mean comments,” he said in his acceptance speech. “Contrary to popular belief, I’m not actually a virgin as you might have read in the comments section.”

“I’ve done it three times,” he jokingly whispered while holding up three fingers.

Owen concluded his speech on a more serious note. He thanked Eric Danis of the GPI for putting on the ceremony and said it was an “honor” to be in the presence of “poker legends such as Phil Hellmuth and Daniel Negreanu.”

Justin Bonomo’s speech was exactly like Owen’s, except not at all. Poker’s all-time winningest tournament player won Moment of the Year for his WSOP Big One for One Drop title. He took the opportunity to make a pitch for compassion in society.

“I want to acknowledge that I’m here due to forces out of my control,” he said before thanking his family and friends for their support.

He then admitted he’s been lucky in life.

“I want to also acknowledge the immense privilege I’ve had that has gotten me here,” he continued. “And privilege doesn’t mean I’m not talented. It doesn’t mean I didn’t work hard. It does mean that I didn’t have as many hurdles in my way as many other people have had.”

Bonomo, who cashed for over $25 million in tournaments last year, claims he’s privileged as a “white American male” who was “born with a family that could provide me with a great education.”

He then used his platform to encourage viewers and those in attendance to be more compassionate and, as he says, “it could have easily been in any one of us” who is down on their luck.

“There is this false narrative that people who are struggling, for example those who can’t pay their own medical bills, that they made some giant mistake in their life, that they deserve to be where they are. And that just isn’t true. That’s not based on reality. People are out there fighting.”

Many poker fans expressed dismay towards the Global Poker Awards for the nominees in Vlogger of the Year and Streamer of the Year. Certain vloggers and streamers such as Brad Owen and Parker “tonkaaaap” Talbot were snubbed.

But, in the end, two of the most popular content producers in these categories won. But neither were in attendance at the PokerGo Studio in Las Vegas to accept their award.

Andrew Neeme won Vlogger of the Year while Lex “RaSZi” Veldhuis took down Streamer of the Year. Daniel Negreanu, a fellow PokerStars pro, read a written prepared speech from Veldhuis. Neeme, who won the same award last year at the American Poker Awards, didn’t have any speech prepared.