In 2015 Joe McKeehen won the biggest poker tournament on earth, the World Series of Poker$10,000 no-limit hold’em main event. For the win he earned more than $7.6 million and his first gold bracelet. Just two years later McKeehen has won yet another $10,000 buy-in hold’em championship, only this time around the game was limit hold’em. McKeehen outlasted a field of 120 players to win his second bracelet and the top prize of $311,817.

“It felt good!” McKeehen told WSOP reporters when asked if this win could ever compare to his win in the main event. “I like this game! This game’s fun.”

“It’s a $10,000 tournament,” said McKeehen after outlasting all those top opponents. “Here, they’re all going to be really tough at the end. All the good players come out for them.”
McKeehen began the day as the second shortest stack with 14 players remaining, but was able to survive and thrive. By the time all of those other accomplished players had hit the rail McKeehen was in the lead, taking a 3-to-2 chip advantage into heads-up play with Jared Talarico, a mixed-game specialist from Houston, TX. McKeehen had plenty of praise for his final opponent.

“He played really good, he played aggressively,” said McKeehen. “He’s tough. I started making a lot of good hands in heads-up, and a lot of my bets were getting through.”

In the end McKeehen was able to keep the pressur on and grind Talarico down to just one big blind. On his final hand he was forced to put his last chips in the middle with the 4Diamond Suit3Spade Suit. McKeehen made the call from the button with the 10Club Suit5Spade Suit and the board ran out QSpade SuitJSpade Suit8Club Suit5Club SuitASpade Suit to pair McKeehen’s five, earning him the pot and the title. Talarico was awarded $192,717 for his runner-up showing. McKeehen also earned 660 Card Player Player of the Year points as the winner of this event. This was his third title and fourth final table finish of the year so far and as a result he has moved into 13th place on the overall leaderboard, which is presented in 2017 by Commerce Hotel and Casino.

For more coverage from the summer series, visit the 2017 WSOP landing page complete with a full schedule, news, player interviews and event recaps.

Wsope To Be Held At Kings Casino Rozvadov Once Again

Priest Sentenced To Prison Sought To Get ‘Revenge’ On God For... 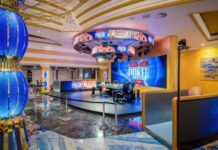