The World Series of Poker announced a new partnership with Chinese mobile gaming and social media giant Tencent with the goal of growing poker in Asia.

It also owns large stakes in both Activision Blizzard, the creator of Call of Duty and World of Warcraft, and Gears of War developer Epic Games.

Tencent and the WSOP will join forces to host the first ever WSOP China live poker event this December in Sanya and the WSOP will also create a program to help train and certify Chinese poker tournament staff.

The WSOP will offer its expertise on event structures, rules, equipment and procedures to ensure any live events bearing the WSOP’s brand will uphold the globally recognized standards of the WSOP.

“There is so much untapped potential in Asia and we’ve found the perfect partner in Tencent to help spread the great game throughout the entire continent,” said Ty Stewart, Executive Director of the WSOP.

Tencent’s Jerry Chen announcing shuffle up and deal at WSOP.

The goal of Tencent and WSOP’s alliance is to tap into the massive Asian gaming market, something Tencent has already made big strides doing.

In 2014 Tencent launched Tencent Pokerwhich has become the most popular social poker app in China.

Tencent has already begun hosting annual live poker events in Sanya in December. Due to gaming regulations all live events in China are free-to-play with players entering the tournament by qualifying through the poker app.

Part of Tencent’s partnership with the WSOP includes land-based events such as WSOP China and WSOP Asia which will award official gold bracelets, as well as plans for a WSOP China Circuit where players can win WSOP gold rings. 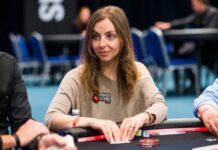