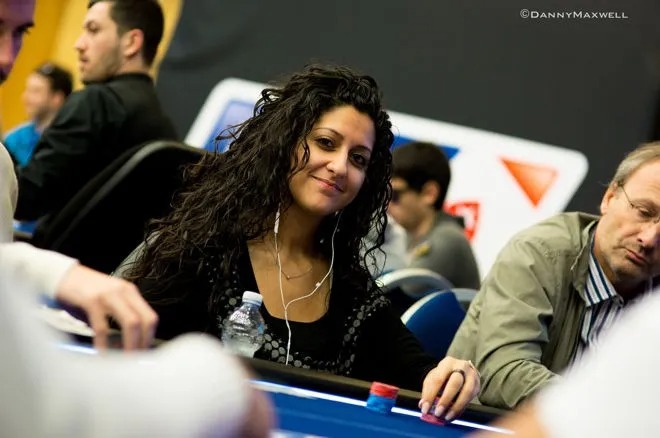 While at the recently completed 888Live Poker Festival London, our Sarah Herring caught up with English poker pro Sin Melin to discuss a couple of interesting hands from her Main Event run that unfortunately fell short on Day 2.

As Melin discusses below, the first was featured on the live stream, a three-way hand that after the flop eventually became heads-up between herself and Cristian Mihu.

As Melin describes, she finds herself calling Mihu’s flop bet on a {8-Clubs}{A-Spades}{2-Clubs} board holding just {J-Spades}{10-Clubs}, reading him for weakness in part because of his previously aggressive play. The turn comes the {2-Diamonds}, and after leading with a bet Melin watches Mihu raise.

Deciding he has no ace and at best is on a draw with two clubs, Melin chooses to reraise big and successfully forces a fold from Mihu. The live stream confirms he was weak and on a draw with just {5-Diamonds}{4-Clubs}.

Melin tells how she showed her bluff at the table, but Mihu wasn’t paying attention and missed seeing her cards. Then in a subsequent conversation on the break, Mihu asked Melin what she showed — and she bluffed him again!

Melin discusses a second, less successful hand from Day 2 in which she found herself in a three-way postflop situation holding pocket kings and looking at a seemingly benign {8-}{8-}{5-} board. Listen to her reads on her opponents in the hand, as well as what happened next: