Among all of the action currently happening at the 2017 888Live Rozvadov Festival in the Czech Republic, a big €100/€100 pot-limit Omaha cash game took place at the King’s Casinoinvolving Theo Jorgensen, Ismael Bojang, Ronny Kaiser, Martin Kabrhel, Jan-Peter Jachtmann, Thomas Bichon and others, capturing the attention of many.

Offering a great chance to witness some high-stakes PLO action up close, we spoke with Jorgensen about a hand in which he managed to scoop a €90,000-plus pot, getting some insight about the hand both from him and from Ryan Laplante — winner of the huge $565 Pot-Limit Omaha event at the 2016 World Series of Poker where he topped a field of 2,483 to win the bracelet and a $190,328 first prize.

The hand arose midway through the first day of the two-day cash game. Here’s how the stacks looked to begin the hand:

Thomas Bichon folded under the gun, and Martin Kabrhel limped from early position holding {k-Clubs}{k-Diamonds}{10-Spades}{3-Hearts}. Ronny Kaiser then raised to €500 with {k-Spades}{j-Hearts}{9-Spades}{7-Hearts}.

Ryan Laplante: The initial limp with kings [by Kabrhel] appears to be fine in this game. They are only seven-handed and people appear to be playing fairly loose. I’d say the raise by Ronny Kaiser is standard.

Ismael Bojang {a-Diamonds}{q-Hearts}{10-Diamonds}{4-Spades}, the player known only as Nick {j-Clubs}{10-Clubs}{2-Diamonds}{2-Hearts}, Theo Jorgensen {7-Clubs}{6-Clubs}{6-Spades}{3-Spades} and Jan-Peter Jachtmann {a-Clubs}{9-Clubs}{5-Clubs}{4-Diamonds} all called the raise, then Martin Kabrhel three-bet to €3,500. Everyone but Bojang called again, and play was five-handed to the flop.

Laplante: I’d say that both of Theo’s peels are on the loose side. However, considering Kabrhel is three-bet squeezing his bad kings and Jachtmann is peeling that said squeeze with the hand he’s holding, then I understand. Ronny Kaiser should definitely peel the three-bet with his hand.

The flop came {8-Spades}{J-Spades}{6-Diamonds}. Jorgensen and Jachtmann both checked, and Martin Kabrhel moved all in for his remaining €2,500.
Theo Jorgensen: This hand is interesting because I have position on the big stack [Ronny Kaiser] without actually being in position. I know that it’s going to check to Kabrhel, who’s going to move all in. Then the action will be on Kaiser and I will then have position on him.

However, I flop a hand that I’m never going to get away from. If I’m extremely unlucky, Kaiser has an overset where I’m beat. In that case, I always have the flush [draw as backup]. The chances that I’m beaten here and have no outs are slim to none. I’m not convinced that my sixes are good, but I am very confident.

Laplante: Kaiser should definitely be trying to isolate here.

Jorgensen moved all in for €34,300. Jachtmann and Kaiser both called.

Laplante: Theo can’t really do anything here but get it in. The only hands that Kaiser can have that he’s in bad shape against are hands with jacks, which are very few combos. Generally, he will be up against two pair with either a flush or a straight draw. If Theo didn’t have a flush draw to go with his set of sixes, he could consider folding, but would definitely need a read that Kaiser is a player on the tighter side.

The turn was the {8-Clubs}, making the board {8-Spades}{J-Spades}{6-Diamonds}{8-Clubs}. A reminder of what everyone had:

Jorgensen: The eight is the dream card….

The river was the {q-Spades}, giving Kaiser a flush but Jorgensen with sixes full of eights.

Jorgensen: And of course he hits his flush just because.

By the end of the five-hour session, Jorgensen was up over €80,000. After this monster hand he visibly tightened up, something he said wasn’t a conscious choice of his.

Jorgensen: I think it’s more a coincidence. [At the beginning] I was just hitting flops and having better hands, and getting into positions where I could do something about it. You could argue that after this hand people started to get a little looser as they had lost quite a bit, so maybe I tightened up a little bit.

Stick close to PokerNews for more action from the 2017 888Live Rozvadov Festival, including live updates and more from the already started Main Event. 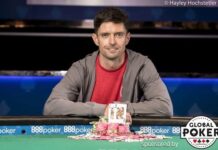