He got got upgraded on his flight over and then got two deep runs early on. Gross played his way into the money in the €1,100 National Championship and then finished 47th in the €2,200 National High Roller. He also partied with Liv Boeree, Igor Kurganov and Zedd after Kurganov took down the PSC Barcelona Super High Roller.

Things then took a bit of a dive.

Gross made it to Day 3 of the Main Event short stacked. Then when the tournament was just a handful of players away from the money, Gross was down to just three big blinds moved all in with A♦K♣. Jakub Wojtas called blind with T♠7♣ and the 5♥6♥9♠ flop gave him a straight draw.

Then an 8♠ came on the turn to give Wojtas the straight and Gross hit the rail.

“Three for three [cashes] would’ve been good,” Gross said. “Get some momentum going.”

Undeterred, Gross hoped to gain that momentum back in the High Roller. It didn’t happen on his first bullet and he lost his second on Day 2. Poker can be a brutal game, especially when you play it for a living, and Gross wants to show his fans that reality with his vlogs and streams.

“There are lots of fun moments and cool stuff,” Gross said. “But there are also times when you lose or bubble and it gets frustrating and you just have to be ready for that and realize it’s not all fun.

“But I think that’s what people like to see. They like to see the truth of it, that sometimes you’re in a funk or a pit.”

And Gross gives you a front seat. From prepping to play events, to PokerStars parties in Opiumand bubbling the Main Event, you can join Gross every step of the way. Gross’s trusty camera is on every day, whether it be the airport, barbershop or gym. On breaks you’ll catch glimpses of Gross recording an update and then, after a full day of play, he edits and uploads it for all too see.

Vlogging and streaming is hard work and there’s no way around it. For the prospective vloggers out there, Gross says it helps to focus on just one viewer: yourself.

“Just do it for you and if it turns into something that’s great, but if not, you have it for yourself,” Gross said.

“You have to really commit to it and I think the biggest thing is to not get frustrated and realize it just doesn’t happen overnight.

If you have more streaming and Twitch questions, there’s a chance you can ask him yourself in a few weeks while you both stream from a luxury yacht in the Caribbean.

All you have to do is play one of the Streamboat freerolls and submit a video explaining why you should get to go on the Streamboat. If you’re sending your video to Gross, he has some advice for you.

“Just be yourself have fun, keep it short and sweet,” Gross said. “Say what it would mean to you to come down, a quick background on yourself and give something special that we’ll remember you by.”

Aside from playing poker, there’ll be plenty do in the British Virgin Islands. Snorkeling, swimming, skimboarding, boat lounging, vegetating in the sun with cocktails and Gross’s favorite, riding a Seabob around the ocean with stingrays and turtles.

“I want the contestants to come down and have a really good time,” Gross said. “To show that you can have fun in poker too. You can work hard and play a bunch, but also enjoy yourself as well.

“It’s nice to have a good balance and I think that’s important for people to remember.”

Want to start hosting a home game? How to get the... 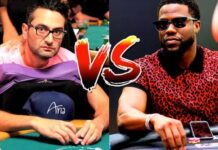