After premiering in August, the heavy music-themed online casino at MetalCasino.com is now hoping to further boost its visibility via the upcoming launch of a social media marketing campaign featuring legendary rocker Ozzy Osbourne.

According to an official press release, the Malta and United Kingdom-licensed domain is set to begin increasing its presence on Instagram and Facebook from Monday and will also start broadcasting the first of five short interviews with Osbourne, who was the original lead singer of seminal 1970s metal pioneers Black Sabbath before going on to have a multi-platinum solo career.

The site declared that the clips are moreover due to see Osbourne regaling viewers with stories of his many guitarists and The Beatles alongside introducing fans to the renowned Rainbow Bar and Grill in West Hollywood, California.

“We are absolutely delighted by the results,” read a statement from Clas Dahlen, Chief Marketing Officer for MetalCasino.com. “The recordings with the quick, witty and super-professional Ozzy became an epic rock documentary with elements of casino gaming.”

Dahlen explained that the upcoming marketing campaign for MetalCasino.com is due to reach its peak in the early summer so as to coincide with Osbourne’s upcoming No More Tours 2 global tour and will even encompass the ‘Godfather of Heavy Metal’ awarding some lucky players with signed memorabilia.

“The interviews will be a perfect vehicle for reaching out to music and gaming fans,” read the statement from Dahlen. “Metalheads will be wowed by Ozzy’s personal memories from the history of rock that have never been told before and hopefully they will go viral on social media.” 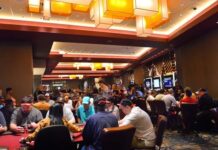