The over 30 casinos in Macau have reportedly recovered somewhat from a disappointing May to post a 12.5% increase year-on-year in aggregated gross gaming revenues for June to approximately $2.78 billion.

According to a Sunday report from GGRAsia citing official figures from Macau’s Gaming Inspection and Coordination Bureau, the most recent result means that the former Portuguese enclave’s casinos have seen their aggregated gross gaming revenues for the first six months of 2018 rise by just short of 19% year-on-year to stand at some $18.59 billion.

GGRAsia reported that the June figure was better than the 12.1% year-on-year improvement for May, which saw the city’s casinos record a 31-day tally of $3.15 billion, although it was still far below the 20% swell that had been predicted by some brokerage firms. This all came after April saw the local sector witness a 27.6% boost in takings to $3.18 billion while March’s total of $3.21 billion had represented a 22.2% escalation.

JP Morgan Securities (Asia Pacific) Limited reportedly detailed via an official memorandum last week that Macau’s aggregated gross gaming revenues for June were set to be ‘quite decent and resilient in our view, especially considering the slow seasonality post the holiday and negative impact from the [2018 FIFA] World Cup.’ It was highlighting its belief that takings were sure to be negatively impacted by China’s traditional Golden Week holiday as well as the lower betting volumes that are oftentimes witnessed around major sporting tournaments such as the festival of football that is currently taking place in Russia. 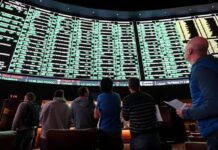 Card Player Poker Tour Returns To The Venetian This Summer For...