Bruno said “I have no words to describe what I am feeling right now. It was a tough tournament, tough final table, tough heads-up. I’m really happy to finally win a WSOP jewelry and it’s even more special because it happened in my backyard.”

When the final table started on Oct. 29, Foster faced off Rodrigo Garrido, the chip leader. There was a lot of action and, after a few hours, Garrido would bust in fourth; Andrey Lago would bust in third. That would leave the only Brazilian November Niner to go heads up with Olympic swimmer and medalist Fernando Scherer.

888poker’s ambassador Bruno Foster finished sixth in the WSOP APAC event in Australia. This win makes it his third WSOP final table. Still he is the first and only Brazilian who make a WSOP Main Event final table.

Who is Fred123? The Poker Bio of Jeremy Martin Mike Jukich Wins the Horseshoe Baltimore Main Event for $165,438 and...

Do you stand with WSOP’s Jack Effel in his decision to... 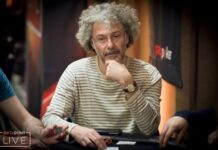